skip to main | skip to sidebar

TEA is in the business of helping people. This blog is intended to address human issues, concerns and the things that impact people - be they self-perpetuated or externally imposed. Feel free to respond to the thoughts presented here, for without each other, we are nothing!

LOOK BEYOND WHAT YOU SEE TO REALIZE WHAT MAY BE… 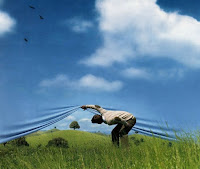 First impressions influence our attitudes as we work with others – sometimes positively but far too often in a negative manner.  Until (and unless) we allow ourselves to view people with an open mind – seeking the value they could bring rather than limiting their contributions by pre-evaluating their abilities based on our initial thoughts and feelings – we will never be able to realize how much of an impact they might be able to make.  We must dig deeper when we work with others – continually seeking to identify the “method to their madness” as we deliberately limit the “madness our own methods” can sometimes create.  While being a good judge of character is a leadership strength, following ONLY the paths that our tunnel vision allows us to easily identify can create much distraction and confusion along our road to success.

Unfounded perceptions can negatively influence our thinking and our actions – potentially undermining another’s ability to contribute and the possibility of enhanced organizational success.  The owner of a small machine shop once stated that he “would like to have a whole shop full of employees like the 76-year old who had retired then come back to work.  He noted his perceived loyalty and leadership ability that was seemingly inspirational to other employees.  Employees revealed that they were always looking for other opportunities – not so much because they did not like the work but rather because they did not want to end up working until they died because they “could not afford to retire” like the 76-year old “role model” that still had to work.  The “individual in question” stated that he was aware of both the owner’s and his fellow worker’s thoughts but that the REAL reason he worked was that it gave him something to do on a regular basis AND that “if I ever met his wife I would know why he still came to work!”  Often our perceptions can taint our thinking – many times creating false perceptions or huge misconceptions.  When working with others we should ALWAYS take time to question, listen and learn before leaping to judgment.

When we act on available information (without first validating our position and/or asking for clarification) we often initiate disaster.  Many years ago, my wife and son were engaged in a heated discussion when I arrived home from work.  It seems that he had been sent to the principal’s office for “hitting a kid with leaves” on his very first day of kindergarten.  She could not understand why “throwing leaves at someone” was an offense worthy of a principal’s attention.  He could not understand why she kept asking him about the situation after he had clearly and concisely answered her question about hitting a fellow student with a bunch of leaves – agreeing that he should not have been punished for such a trivial infraction.  I looked at my tearful son and asked, “How big of a stick were the leaves attached to?”  Upon hearing the “right” question he brightened and made an inch wide circle with his fingers and said, “Oh, about this big – nobody asked me that!”  We often lose sight of where we are going because we are so focused on what we think we know as determined by where we have been, what we have heard and what we have experienced.  Never form an opinion without first thinking about all the things that COULD BE rather than simply focusing upon what we think IS or HAS TRANSPIRED.  Always take the next step to learn “the rest of the story” before committing to a course of action or changing what has always worked (and is still working) to something that has not been tested, tried or thought about.

In order to maximize our own potential (AND encourage others to reach theirs) we must recognize that others truly do matter in life.  We can lift each other up (or weigh each other down) depending on how we view the relationships we might be able to establish.  If we verify our perceptions before we pass judgment we can often avoid making assumptions that could lead us down the wrong path.  If we ask for help and opinions from others before acting on our own – particularly when they may have already “been there and done that” – our journey can become much easier (for we may not have to “reinvent the wheel” before rolling down the road).  If we truly seek what others can contribute and listen to their words when we see their mouths moving (rather than using their “talk time” as an opportunity to catch our breath before continuing to “have our way” or “impose our will” upon others) we may find support and affirmation coming from unexpected sources all around us.

People tend to act and respond in the manner they are treated.  If we respect others and help them to elevate their ideas to the next level they will contribute in surprising ways.  If we assume that others are but pawns within the chessboard of life – foot soldiers whose only purpose is to “march into battle” as ordered without questioning the “why” of their actions or the “where” of their going – we will never come to appreciate the “hidden good” that others have within them – good that will bubble to the top making their NEXT employer or relationship great.  Look beyond the obvious to make sure you pay enough attention to what others say and do (and sometimes what they may NOT say or do because of fear or intimidation) that you can enjoy the difference their input makes in your life (AND you in theirs).

Posted by Unknown at 9:03 AM No comments: